Backed by campaigns from animal welfare organisations, the NSW Greens and others –  5 separate Do Gooder campaigns in all – NSW Premier Mike Baird shocked the nation by announcing a total ban on greyhound racing. Thus putting an end to cruel training practises like live baiting, dog doping, discarded canines and a money trail of questionable “tax breaks”, gambling, and profiteering.

“No dog should have to die for a bet,” said the late and widely-respected Greens MLC John Kaye in one of his Do Gooder campaigns to protect greyhounds. And in NSW – and soon the ACT – now they won’t have to.

Campaigns to end greyhound cruelty have called on the Premier and cross-partisan MPs across the state to end the barbaric practise in Australia, one of only 8 countries in the world to still do it.

Premier Baird acknowledged the tireless work of Dr Kaye, supported by the NSW Greens and animal rights groups, to bring this to his attention. Following a damning exposé by Four Corners and a Special Commission which revealed widespread animal cruelty and corruption, Mike Baird had this to say: 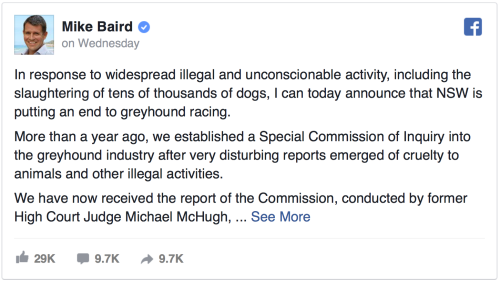 Immediately following the announcement, big money backed by the NSW Labor Opposition have begun a campaign to undo the ban, spreading misinformation about employment impacts and a genocide of unwanted dogs.

“We are so close to a ban on greyhound racing after so many years of campaigning,” NSW Greens Environmental spokesperson Mehreen Faruqi told Do Gooder. “But with the Labor party and other members of the crossbench siding with the greyhound industry even after all the evidence of systemic animal cruelty, a ban is not guaranteed. Politicians need to hear the voices of animal advocates more than ever.”

This is turning into a battle pitting right versus might – and Do Gooder campaigns are already popping up to lend might to what is right.

Click here to send a message to your MP to support the ban.

Oregon does good and doubles down on renewables

Now you’re speaking my language. Multilingual campaigns are a go!